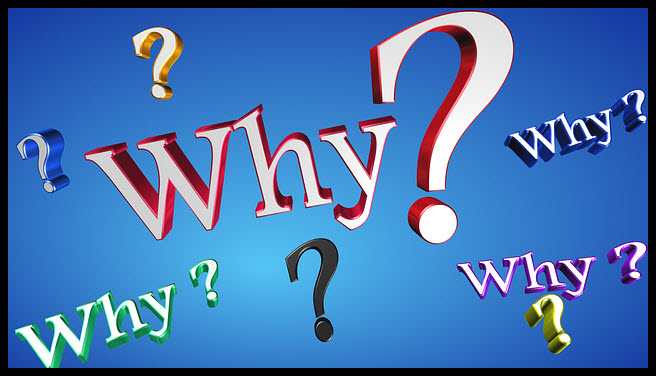 Leadership strategies for change, start by asking why.

Because it could be the single best way to inspire anybody — prospects, co-workers, or otherwise — to do anything.

To back up and explain…

The title was “How Great Leaders Inspire Action” but the essence was even simpler than that.

You can inspire people, the speaker suggested, by simply asking that one question we opened with:

Leadership Strategies for Change: The Why Dartboard

To explain, says the speaker, let’s say you have a circle in front of you. In the center, you write that question… “Why?”

Around that, draw another circle.

It will look like the start of dartboard, only in this next circle you’ll write “How?”

Around that, draw a third circle and in this one write “What?”

Working from the outside in, most people know “what” they do or want to do in a business life or other venture. Telling your customers the same is pretty basic stuff, and not all that exciting.

Most people also have some idea of “how” they do what they do or how they intend to do it, technically speaking.

But that, too, isn’t the information that’s going to make either you or your prospects want to jump their metaphorical motorbikes over metaphorical swimming pools filled with flesh-eating goldfish.

When you ask “why,” however, you get to the root of your existence… as in why are you here in the first place? It’s a chance to expose the things you believe in and therein… to inspire others when you show them the thing that inspires you, too.

The average organization, says the TED speaker, presents themselves and communicates from the outside of these three circles inward, as in:

But the inspired leaders creating leadership strategies for change, he says and I completely agree, simply work from the outside in, like this:

Suddenly, it’s not just a thing in front of you. It’s a belief that gives you a vision of that belief in action, then shows you that it exists.

People DON’T buy what you do.

They buy WHY you do it.

Think about it this way…

Microsoft made a Zune and it doesn’t sell. Why doesn’t it sell? After all, it’s an MP3 player. It would have done the job you wanted.

And that’s not “why” enough for me. Is it for you? Unless you’re a shareholder, what do you care about Microsoft’s own corporate objectives.

Meanwhile, Apple — here I go again — puts out the iPod. And “why” do they do it? To make money just like Microsoft, sure.

But much more so, they put it out because, said Jobs himself, “We all love music over here… it’s part of what defines us. We didn’t design the iPod that would sell… we designed the one that we would all want to use ourselves.”

Any real music lover could get down with that.

The TED speaker, Simon Sinek, calls this the “Golden Circle.” And, he says, it’s not just a nifty way to explain inspirational communication.

Your brain is actually built this way, so that on the outer level you’ve got the part of your brain that handles all the logical, rational stuff. This corresponds to the outer “why” and secondary “how” levels of the circle.

Here, people can understand lots of facts and figures. They can evaluate your lists of features and benefits. They can “get” the mechanisms you use to do what you do.

But none of this is tied to action. For leadership strategies for change you’ve got to move more toward the limbic center, where your brain is all about gut-reactions, feelings of trust, and… maybe most importantly… action.

The limbic center is, if you will, your “animal” brain. Words mean little here, except for the emotions to which they’re attached.

This is where the “why” resides.

If you’ve ever looked over all the details of a decision, done all the cocktail-napkin math, come to a conclusion… and STILL decided to do the opposite because “it just didn’t ‘feel’ right”… and believe me, you HAVE done this over and over again… this is where in your brain that you made this decision.

Short version of leadership strategies for change: In any instance that you have to inspire anybody to do anything, you’ll go a long way toward success by simply asking yourself “why” you want the result you’re after… and then making sure it’s a “why” that’s going to feel good to your prospect too.