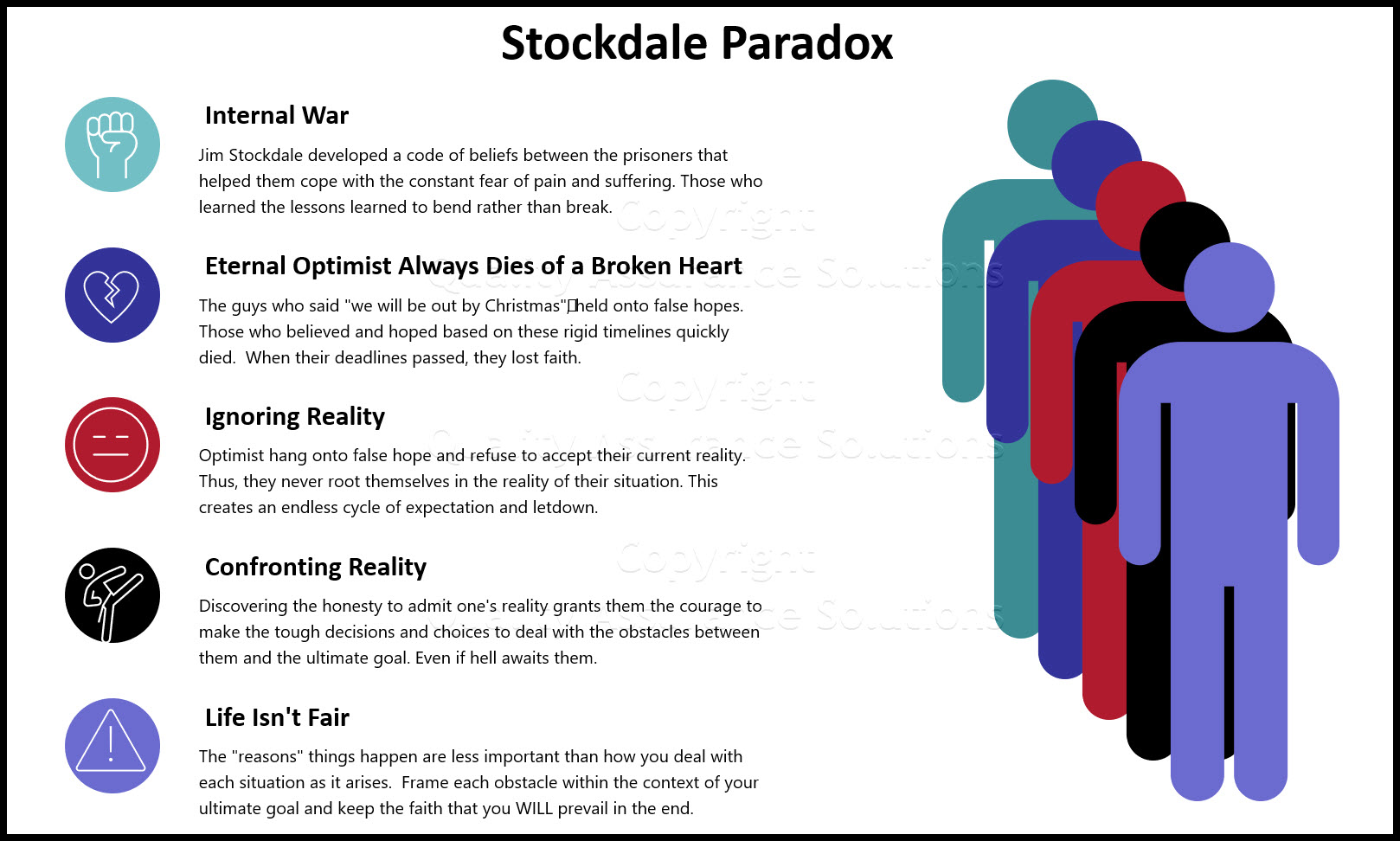 The Stockdale Paradox may change your life.

The Stockdale Paradox, developed by Jim Collins' research team in the book "Good To Great", insulates your team, business, or life from adversity and guards your faith during the trudge toward success.

Collin's named this paradox after Admiral Jim Stockdale. The Vietnamese captured him in 1965 and held him in prison for 8 years. During this time they tortured him over 20 times.

As the highest ranking officer held in the prison "Hanoi Hilton" , Stockdale took it upon himself to lead his fellow prisoners in the best way he knew. He bolstered their morale against the crushing torture, sickness, imprisonment, and almost sure death.

He basically taught his peers how to have unwavering faith in the face of insurmountable odds.

The optimists died while the realists lived. Those who accepted their fate with unwaivering "faith" that they would ultimately be saved had the fortitude to live, while those who held out "hope" almost always died.

The Internal War With Self

Jim Stockdale developed a code of beliefs between the prisoners that helped them cope with the constant fear of pain and suffering. Those who learned the lessons learned to bend rather than break.

For these men, unwavering faith in your ultimate salvation meant "confronting the brutal facts of your current reality, whatever they might be."

Learn SPC in an hour. Train your employees. Improve your processes and products. Prevent defects and save your company money.

The Eternal Optimist Always Dies of a Broken Heart

The guys who said "we will be out by Christmas", held onto false hopes rooted in specious information. Those who believed and hoped based on these rigid time lines quickly died.  When their self-appointed deadlines passed they lost faith due to their unfulfilled expectations.

The Key Elements of Greatness Are Simple and Straightforward

Optimist hang onto false hope and refuse to accept their current reality. Thus they never root themselves in the reality of their situation. This creates an endless cycle of expectation and letdown.  They build a resentment to their current reality which culminates in them giving up hope, and dying.

By looking at your reality, as it stands (objectively), rather than how you'd like it to be (subjectively) gives an individual a good sense of his "stock-in-trade".

Twelve step groups successfully use reality checking process and calls it "personal inventory". It is a "fact-finding and fact-facing" process.

Discovering the honesty to admit one's reality grants them the courage to make the tough decisions and choices to deal with the obstacles between them and the ultimate goal. Even if hell awaits them.

Life isn't fair, actually "fair" isn't reality. The "reasons" things happen are less important than how you deal with each situation as it arises.  Frame each obstacle within the context of your ultimate goal and keep the faith that you WILL prevail in the end.

The Signature of Greatness

Collins found in his research that each enduring company that went "from good to great", applied The Stockdale Paradox naturally without consciously knowing it.

The best leaders present their ideas simply and straightforward in their dealings. That's Occam's Razor and "Pareto's Principle" in a nutshell. They deal with the few things that have the most impact on results, they don't get caught in the minutia.

When you take on the principles of the Stockdale Paradox as a way of life, you exponentially increase the odds of your success.