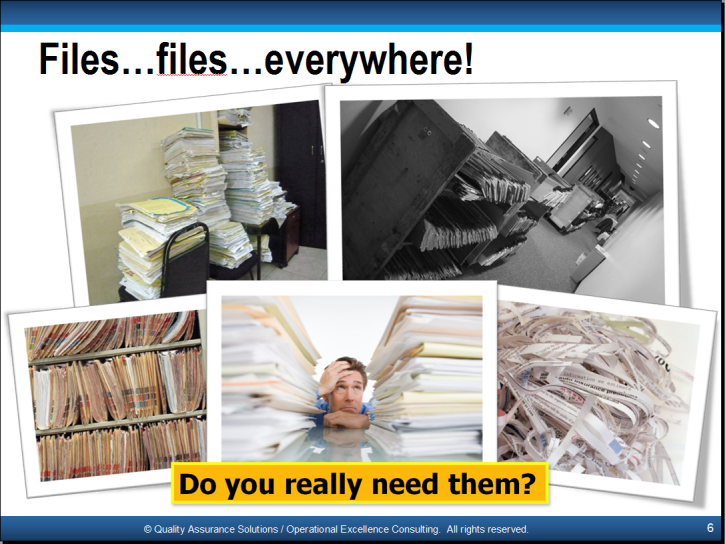 There is an important organizational technique that originated from Japan: the office 5S management methodology. When it comes to organizational and office management techniques, the goal is to have the leanest organization possible that can deliver the best results possible to the satisfaction of all stakeholders. The Japanese have for ages been pioneers in best management practice with the 5S business process philosophy being one of the most well known business concepts of the 20th Century.

The term ‘5S' is coined from the first letters of each of the 5 Japanese words that form the basis of this philosophy. A number of attempts have been made to have an English equivalent to the 5S office without losing the original meaning of each word. This of course is always a difficult task but there are two versions that have come fairly close to achieving this objective and are the most widely accepted. We will look at each of the Japan 5S and their role in office management.

In a busy office environment, the amount of paperwork and other media through which work is conveyed, can be overwhelming. But the biggest problem comes when this paperwork is allowed to pile pending action or filing. Over time, it becomes difficult to distinguish items between items that require action and those that need to be stored or discarded. This pile up becomes an impediment for efficient work.

It is important for that which is not needed is discarded and what one can do without for a long time, is filed away. This is the essence of the Seiri principle. Implementation can be achieved by sifting through the items in the office and appropriately tagging those that need to be discarded or stored.

Once what is not required is out of the way, one then moves to the Seiton phase. Though we may not realize it, a lot of potentially productive office time is spent reaching for or looking for the different items required for work.

To avoid this, items in the office should be arranged in such way that what is used frequently is kept as near as possible to one's workstation while that which is used less can be placed farther away. In addition, the arrangement of items must be in such a way that as little effort as possible is expended during retrieval. A good example is placing certain items between eye and hip level as opposed to ground level.

It takes more effort to restore something that has been neglected for a while than it does for an item that is serviced regularly. In addition, striving to maintain each item in its best condition extends its usability in the long term and could even aid in making work easier.

For Seiso, always make sure each item is kept in immaculate condition. This involves both cleaning and regular maintenance.

There is one answer: structure. Without structure, few initiatives ever succeed in the long haul. The absence of a laid down process can quickly erode any gains made, swiftly deteriorate into confusion and eventually lead to the dearth of the office 5S.

Document all the process that support the Seiri, Seiton and Seiso phases is critical.

As is all too familiar, starting a great initiative is usually the easy part; sticking to it on the long term is often the most difficult aspect. To achieve shitsuke, the organization must integrate into its processes a means of monitoring adherence to all to the office 5S.

There should also be a way of rewarding persons that have gone beyond the call of duty to make sure that they play their part in making the 5S office a daily reality. The organization must look for ways to make the integration of the office 5S exciting in order keep all stakeholders interested and involved.